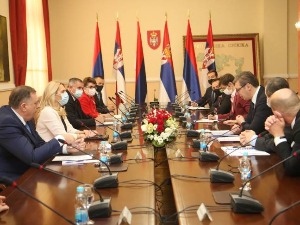 A meeting of the High Council for Cooperation between the Republika Srpska and Serbia is being held at the Palace of the Republic in Banja Luka. All previous joint projects are discussed at the session, but plans for future projects will also be considered.

Banja Luka marks City Day today, April 22. It is celebrated as the Liberation Day of the city in the Second World War.

This year, the highest recognition of the key city with the charter of honorary citizen will be awarded to President Aleksandar Vučić for his contribution to the development of the city, but also of the Republika Srpska.