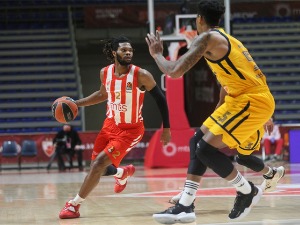 The star broke the maler, beat Khimki and broke the black collection

After eight tied defeats in the Euroleague, the Red Star finally felt the taste of victory.

At the beginning, it seemed that the black series would continue, since Zvezda could not get a more fluid game in the attack, so Khimki dictated the pace until the end of the third quarter.

Eric McCollum and Jordan Mickey were unstoppable, despite a very good defense of the red and whites.

In the middle of the third quarter, Duop Rit entered the game, after a long break, and his contribution was immediately felt.

The star managed to turn it around with three points and take the lead with a nice six points, at the beginning of the last quarter, but Khimki managed to come back.

Dejan Davidovac gave Zvezda the advantage, with the fourth triple from the fourth attempt, but the guests did not give up.

The red and whites continued with threes – Lloyd scored from a great distance, and then Branko Lazić for the first double-digit advantage – 83:73.

The shot for three points served the red and whites very well and judged the guests in this match – 16 three-pointers from 23 attempts.

Eric McCollum was the most efficient in the match at 29, and Jordan Mickey scored 27.

WE ARE APPROACHING THE NUMBER OF 2 MILLION, 1,918,443 doses of vaccines have been given in Serbia to this point