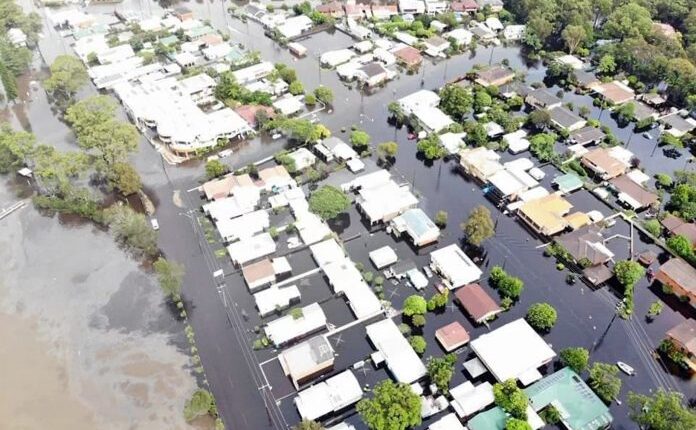 The east coast of Australia does not have time to rest – after catastrophic fires and drought a little over a year ago, and then almost 12 months of pandemic, the most populated part of the country was hit by floods that are not remembered in the last 60 years.

The terrible storm, followed by a stormy wind and long-lasting heavy rainfall, has not calmed down for days along almost the entire coast of NSW and southeast Queensland. A record amount of rain led to rivers overflowing their banks, and for the first time in five years, water began to overflow over the Varagamba Dam west of Sydney.

Parts of the north and middle coasts of New South Wales, on the stretch from Coffs Harbor, through Port McVorry, Tarija and Nelson Bay, suffered the most. In these parts, over 400 millimeters of rain were recorded in 24 hours, so large parts of urban and rural areas were under water.

A state of natural disaster was declared on Sunday morning, and rescue teams even had to use helicopters to pull people out of flooded houses in some of the most endangered places.

Thousands of households were evacuated along the coast, and the local population desperately fought to save not only human lives, but also animals on farms. Despite that, hundreds of heads of various cattle were lost in the conditions of a terrible storm, and many owners are looking for them.

– Such precipitation happens once in 50 years. It is difficult for me to have to say this again, but next week will not be easy for all of us in NSW – said the Prime Minister of this country, Gladys Bereciklian, and announced that according to meteorologists, storms in some parts of the country will last almost until the end of the week.

The most difficult situation is in the suburbs on the outskirts of Sydney – in Penrith, Im Plains, Windsor and Wallachia, where some parts of the residential parts of the settlement were evacuated. All these suburbs are located right next to the narrowest parts of the riverbeds of the Nepien and Hawkesbury, which mercilessly flow into the coast and further into the plain. At Windsor, Hawkesbury even reached a water level three meters higher than the flood level – as deep as 15 meters!

Due to the floods, classes have not been held in as many as 137 schools along the coast of New South Wales since yesterday, so many students will return to distance learning, as they had to do for the most part last year due to pandemic restrictions.

The emergency service received over 7,000 calls for help, and over 670 rescue operations were carried out in the flooded areas.

Hundreds of houses, workshops, as well as a number of restaurants in the central streets of smaller towns are under water in most of the affected places along the north and central coast of NSW. In Port McVorry, Kkofs Harbor and Tari, cars floated through the streets, and many parks were turned into lakes from which only the tops of street lamps.

According to the forecasts of meteorologists, stabilization should take place in Sydney and its surroundings tomorrow, but not in the north of the country, where the storm could last until Friday. Also, it is expected that today this system of high atmospheric pressure will be transferred further north to Brisbane, as well as to northeast Victoria.

Assistance from other Australian states was immediately sent to the affected NSW areas. As early as Saturday, members of the emergency services from Queensland, South Australia and Victoria started arriving in the flooded areas, who joined their colleagues from New South Wales in the rescue operations of the local population.

Solidarity was once again shown in action among people from different Australian states, as well as during the recent harvests near Perth and during the black summer 2019-2020. in New South Wales and Victoria.

The biggest floods since 1961.

Bureau of Meteorology officials say the flood level of the Nepian River in western Sydney is equal to the terrible floods of 1961. According to BOM service manager Justin Robinson, the river level is equal to the event from 60 years ago, and far higher than the floods from February last year. as well as the larger ones from 1990 and 1964.

– Something like this hasn’t happened in a long time. We have a flood equal to the one from 1961 – said Robinson.

The federal government of Australia has started paying one-time aid to everyone whose houses were damaged or destroyed in the floods. Each adult is entitled to $ 1,000, and children to $ 400.

For more information on state aid, you can call Services Australia at 180 22 66.

La Ninja is to blame for everything!

The storm, which has been “slapping” NSW and parts of Queensland around the Gold Coast for days, is a consequence of the climate phenomenon La Niña, which has been dominating the South Pacific for a year. This year, La Ninja brought an extremely humid summer to the east of Australia, slightly lower temperatures than in previous years, with large amounts of precipitation.

Meteorologists say that La Ninja will continue to dictate the weather throughout the fall, although its intensity is slowly beginning to weaken.

Johnny Depp unveils statue of himself at Serbian movie pageant

Preview: Serbia vs. Republic of Eire