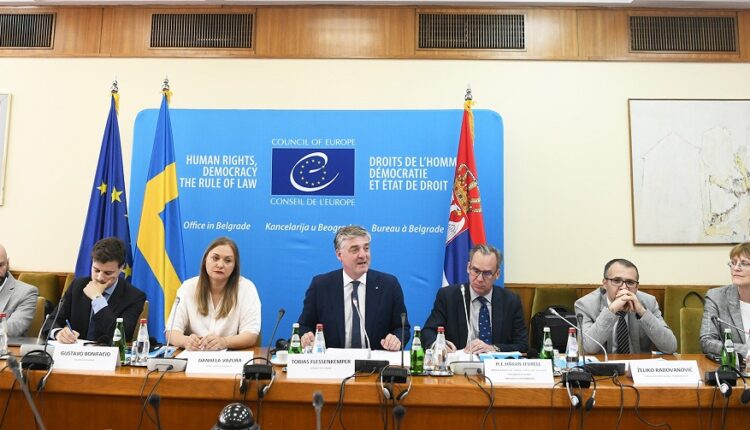 Taking inventory of progress within the space of combating cash laundering and terrorist financing: Council of Europe to maintain supporting authorities of Serbia

This was one of the key messages at the meeting to take stock of the achievements of the Council of Europe project “Preventing money laundering and terrorist financing in Serbia”, funded by the Swedish International Development Agency, held in Belgrade on 8 June. The project aims at supporting Serbia in addressing systemic deficiencies to combat money laundering and terrorist financing.

Tobias Flessenkemper, the Head of the Council of Europe Office in Belgrade, recalled in his opening remarks that money-laundering and terrorist financing, whether in connection with corruption or other economic crimes, war criminals or other organized criminal groups, human trafficking or other criminal activities , , undermine the core values ​​which the Council of Europe seeks to protect – human rights, democracy and the rule of law.

“Serbia’s efforts to step up the fight against money-laundering are a prerequisite for promoting fundamental rights and freedoms and for the development of a resilient democracy at the service of everyone in the country,” said Flessenkemper.

HE Hakan Jevrell, Special Envoy (Ambassador at large) on Organized Crime of the Kingdom of Sweden, stated: “The fight against organized crime and its devastating impact on society, democracy and development has been made a clear priority of Swedish foreign policy as expressed in the Foreign Policy Statement made by our Minister for Foreign Affairs at the Parliament in February 2022”

He noted that money laundering is a vital instrument of organized crime. “It is estimated that more than 80% of organized crime groups in the EU infiltrate the legal economy. An overwhelming 60% or more are thought to engage in corruption. It is therefore vital to disrupt criminal finance and break the financial power of organized crime. The project that we are discussing today is unquestionably one of the flagship initiatives of the Swedish development cooperation in Serbia in this regard. For me, this is an opportunity to learn more about the progress made by Serbia in the area of ​​fighting money laundering and terrorist financing, discuss the challenges and convey the strong support of my government to the hard work ahead of you,” concluded HE Jevrell .

Evgeni Evgeniev, Head of Unit at the Economic Crime and Co-operation Division, Department of Action against Crime, Directorate General of Human Rights and Rule of Law of the Council of Europe underlined that it is of utmost importance that Serbia continues its reforms aimed at address distortions in its economic development which stem from the shortcomings in the suppression of economic crime, including of organized crime and corruption. He emphasized that the effectiveness of implementation of the anti-money laundering measures remains a key priority in strengthening the rule of law in Serbia.

The conference gathered representatives of the Council of Europe and all partner institutions in Serbia to discuss the implementation of the project and chart the ways forward.