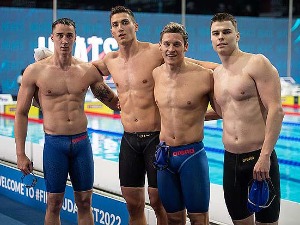 The Serbian team achieved a great result and they were missing five tenths to break the state record they set at the Olympic Games in Tokyo when they were tenth.

The final race is scheduled for 7.36 pm at the Danube Arena in Budapest, and all world powers in swimming, the United States, Australia, Hungary, Great Britain, Canada, Italy and Brazil, will compete for medals with the Serbian team.