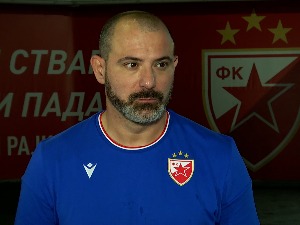 : Stanković for RTS: Because of the followers, it isn’t straightforward to beat anybody with 5:0

“When we win such an important and important match, we leave the analysis for later. There were good things, but also those that could be better. Nothing can diminish this evening, a full stadium, a convincing victory”, are Stanković’s first impressions after the match.

Zvezda beat Pyunik 5:0and the coach of the Serbian team said that his team had to be patient.

“The stars came armed with patience. The match had to be sweated out, a goal was disallowed and the euphoria affected that we were not sure on the ball for 15 minutes. As the match progressed, we punished every mistake of the rival. Winning 5:0 in the qualifiers is not easy, who no matter who the opponent is,” adds Stanković.

The head coach of the red and whites especially thanked the fans.

“Thanks to the full stadium, thanks to every star who was in the stadium and next to the television, this evening is for them and their energy is really special.”

There are no formalities, I don’t want formalities in this competition and the boys know that. We will not go on an excursion, we will work on the omissions, but I understand them. We started well in the championship, this is the first game in Europe, emotions worked and it’s not easy to play in a full Maracana,” concluded Stanković.