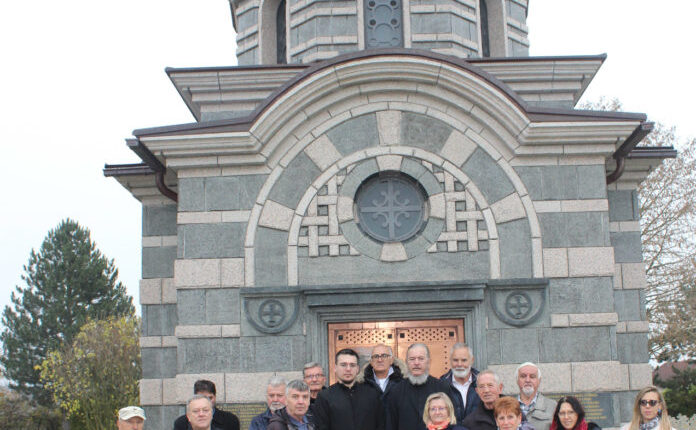 WORSHIP THE SHADOWS OF HEROES: Priests and parishioners in front of the memorial chapel

The Day of Reconciliation in the First World War was also marked this year in Upper Austria, with a memorial service and the laying of wreaths on the monuments at the Italian cemetery in the settlement of Raiferdorf in Mauthausen, where 8,000 Serbian victims rest. Parastos was served by Archpriest Staurophore Dragan and Deacon Nemanja Mićić from the church of Vasilije Ostroški Čudotvorec in Linz.

A group of parishioners gathered at the memorial chapel of the Holy Serbian New Martyrs, which is just dedicated to our compatriots, and paid homage to the shadows of the deceased. In memory of our victims, the church community from Linz in previous years, with prayers and the construction of a chapel, protects the deceased Serbs from oblivion who have found eternal peace here.

– We must guard places like this because we do not have to first forget the sacrifice made here by those buried here for our state and people. Serbia participated in the First World War for the longest time and in relation to the number of inhabitants it suffered the greatest civilian and military casualties, so it is clear why it is important that we gather here – said the priest Mićić.

The remains of 8,000 Serbs lie in the cemetery, in six mass graves. It is interesting that out of six, two tombstones or stones are missing and it is not known who removed them, why and how. The cemetery is trapezoidal in shape, with graves of 1,766 Italian soldiers from the First World War and 1,677 (military and civilian) fallen in the Second World War arranged in individual rows. The English, French, Romanians, Austrians, Czechs and Hungarians, who died as a result of the typhus epidemic, which in 1915 affected the prison camp and settlements in its vicinity, also rest here.