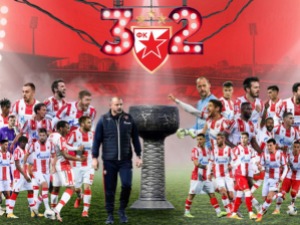 Four rounds before the end of the championship, the Red Star players secured the title of champion.
With the victory over Vojvodina in Belgrade, the red and whites reached the 32nd title in the club’s history, and the fourth in a row.

Zvezda welcomed the team of Vojvodina at the “Rajko Mitic” stadium, and achieved a victory that mathematically secured her the title.

Zvezda took the lead in the 13th minute, with an own goal by Siniša Saničanin, and after the goal, the tempo dropped, so there was not too much interesting football in Belgrade.

In the 60th minute of the game, there was a basketball on the field, after a rough foul by George Đurić, in the middle of the field.

Đurić was excluded, the coach of Vojvodina, Nenad Lalatović, received a yellow card due to an objection, and the match continued after the passions calmed down.

Vojvodina, although with a smaller player, tried to attack until the end, but Zvezda calmly and calmly kept the result and reached the goal.

Stankovic: All the credit goes to the players

The coach of the Red and Whites, Dejan Stanković, praised all his players after a long season in which the team “achieved the maximum”.

“Everyone who watches Crvena zvezda sees that these are really great guys. I would like to thank the club for the trust and the given chance. I don’t want to give up and I won’t give up, because there is still a lot to be done. We are on a great path, but I am very sorry that there were no fans. When they return to the stands, I am convinced that the stadium will be full. These guys really deserve it and I hope that the fans will be able to greet our players and say a big thank you to them. ” , said Stankovic.

He used the opportunity to thank the professional staff, as well as everyone who is part of the red and white family.

“I want to express my gratitude to my professional staff. These are people from the shadows, who work day and night to make everything work at the highest level. Their merits are huge and I thank them for their honesty and loyalty. They are always with me. And when I’m angry, like and when everything is in place. I have their full support and understanding, “said the Zvezda coach.

Terzic: I am proud of everything that has been done

The general director, Zvezdan Terzić, believes that the fourth title in a row speaks of “what the Red Star is today.”

“I am proud of everything that has been done, not only in the domestic championship, but also in Europe, especially when we take into account that we withstood the financial blows of the crown and won the title superiorly, while dealing equally with teams like Milan. We have shown that we are the best team in Serbia and that there is no controversy about that. In addition, many records have been broken and this is definitely a year to remember, “Terzic pointed out for the club’s website.

Despite the fact that the title was won, there is no time to rest in the Red Star.

“We are waiting for the Cup final and immediately after that we are preparing for the new qualifications for the Champions League. We have set the highest possible goals, and we have shown the ability to break the boundaries and we will continue to do that,” Terzic said.