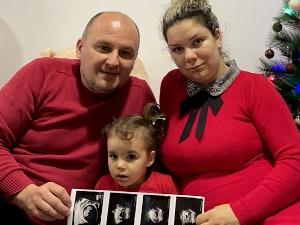 RTS :: State of emergency within the Gaćeš household

“Come inside, the woman says, here’s one, here’s another, here’s a third, and then a dramatic 20-second pause – dad, can you see this – I see, I answer. Yes, it’s not my profession, I know roughly what I’m looking at, but it’s in vain , the brain does not process the information, she asks do you see, I answer – I see, but I don’t know what I see, she says congratulations – fours”, says Đorđe Gaćeša.

Iris, Inda, Irina and Ina were born on Good Friday, prematurely, in the 28th week of pregnancy. Marija and Đorđe Gaćeša became the parents of the first naturally conceived quadruplets in Serbia.

The girls are still in the hospital, but there is a state of emergency at home: beds have been purchased, the stroller has yet to arrive from America because there are no strollers for four in our country.

Even the doctors at the first ultrasound could not have guessed that Marija and Đorđe would become the parents of four girls.

They also have an older daughter, Iskra. She is two and a half years old. He looks forward to the arrival of his sisters, and on weekends, when he is not going to kindergarten, he helps his mother take milk to the babies.

“The visit lasts about half an hour, but they always come to meet us because of the number of babies. We just can’t get ready, to get dressed, since there are special conditions for entering children, disinfection, dressing, then talking with the doctor and then when we have to let’s get to them, 20 minutes have already passed,” says mother Marija Gaćeša.

There is about a month left until the arrival of the princesses. Although they are aware that they will now have to take care of five girls at the same time and without the help of their grandparents, they are looking forward to it. They are impatiently waiting for the day when the Gaćeš family will finally be together.