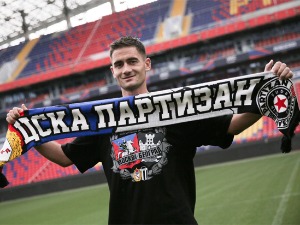 Zdjelar (27) has played in Partizan since 2018, and he arrived in Humska from Olympiakos.

“I realized my boyhood dream when I played for Partizan. When the opportunity arose to play for my brother’s club, it was not difficult to make a decision,” Zdjelar said at the “Armejaca” stadium.

He grew up in OFK Belgrade, and was a member of Olympiakos from 2015 to 2018, and spent some time on loan in Majorca and Partizan.

He played 197 matches for the “black and white” and scored six goals.

Zdjelar went through all the youth selections of Serbia, and with the youth national team he won the 2015 World Championship for players under 20 in New Zealand.

He played one match for the “Eagles” A team.