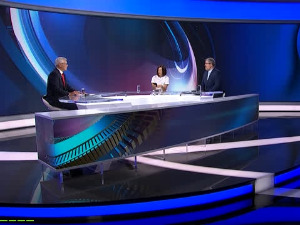 Assistant Minister of Foreign Affairs Nemanja Starović and “Nedeljnik” magazine columnist Ljiljana Smajlović spoke about the de-escalation of the situation in Kosovo and Metohija in a special edition of the Oko show.

The fact that Prishtina, under pressure from the international community, postponed the implementation of the decision to ban Serbian license plates and personal documents in Kosmet, Starović sees as a small victory.

“If we can talk about good news or small successes – the fact is that after the very dramatic situation last night there was at least a temporary de-escalation, that peace and stability were preserved, that people’s lives were preserved and that some time was gained to they solve the key problems that exist in a calm way,” said Starović and added that none of this would have happened if it were not for the determination of our people who live there.

He considers it positive that the prime minister of the temporary institutions in Pristina, Aljbin Kurti, was stopped in implementing his “agenda of withdrawing unilateral moves”.

“We can interpret that as a small success, but there is no room for any relaxation, in the days and weeks ahead I am afraid that we will have a lot of work to preserve peace and stability,” said Starović.

He adds that, bearing in mind Aljbin Kurti’s pattern of behavior, one cannot speak of calmness and recalls that at last year’s meeting in Brussels, the last high-level, Kurti refused to sign the three-point agreement prepared by Miroslav Lajčak and his team.

That agreement contains one sentence that both sides will refrain from withdrawing unilateral moves that would lead to destabilization on the ground, said Starović.

With that, he points out, Kurti announced everything that followed – attacks and shooting at Serbs in Kosovo and Metohija, confiscation of Serbian products, ban on referendum on constitutional changes, ban on voting in elections…

“There is a clear sequence of unilateral measures that he continuously implemented. First, because he saw that there were no consequences… Second, history taught him that organized violence against the Serbs of Kosovo and Metohija always pays off,” said Starović and reminded that after the pogrom in 2004, the representatives of Pristina received the green light from the West to declare the so-called independence.

Starović also notes that the moves made by Aljbin Kurti are aimed at diverting attention from the obligations facing Pristina, since a clear signal was given from Brussels that the first topic of dialogue will be the formation of the Union of Serbian Municipalities.

“Kurti inflames the situation that we all now have to deal with putting out fires, while he is postponing everything that is his duty,” said Starović.

He notes that geopolitical circumstances are favorable for such moves by Pristina, referring to the situation due to the war in Ukraine. In this context, he sees Kurti’s moves as, as he says, “geopolitical vulture”.

And for Ljiljana Smajlović, as she says, Ukraine is the key word – which makes the situation in Kosovo and Metohija more dangerous.

“Everything that Kurti does, everything that happens down there is more dangerous because this is the moment when every opponent of Serbia seems to need to profit politically from the fact that Serbia is a lonely island in Europe when it comes to imposing sanctions on Russia and that they will gain not only the Quinte countries, but the entire Western international community against Serbia,” said Smajlović.

The background of the “energetic” reaction of the West

She stated that in the reaction of the US Embassy in Pristina, “the feelings of the Kosovo government were taken into account”, but she still sees the fact that they reacted immediately as positive.

“It would never have occurred to me that the Western community would intervene immediately that same evening in favor of Serbia,” says Smajlović and points out that the context of American policy in the Balkans has also changed.

She also sees the reason why Belgrade managed to produce an energetic reaction on the same evening in the fact that, according to her, the impression was created that people were terribly angry.

“And that God knows what could happen and that they will not tolerate it and that they will not accept it. You have a situation where you, as the country of Serbia, have to tell the West, don’t do this, don’t let Kurti do this, this seriously derogates from our rights and we We cannot accept this and we cannot take away people’s right to protest against this,” says Smajlović.

Starović, on the other hand, states that the intense activities of the President of the Republic, as well as other authorities, contributed to this, but also that it is a consequence of the serious credibility that, as he states, has been built in the last 10 years.

“And now, in these crisis situations, we managed to send adequate messages and produce a reaction that was really not expected,” said Starović.

Fake news to the detriment of the Serbian side

The interlocutors condemned the fact that fake news appeared in the media and social networks yesterday about what is actually happening in Kosovo, as well as the fact that the Serbian army clashed with the Kosovo police.

Starović believes that it was initiated from Pristina and notes that in the reports in which the issuing of duplicate documents to people with Serbian ID cards is presented as something normal – it misses the point.

“It was not said how dangerous this attempt to implement that unilateral measure actually is. It does not refer to whether some man will lose two or three minutes on the administrative line, by arbitrary interpretation of the agreement, and Kurti wanted to apply that dispute to the Serbs as well north of Kosovo and Metohija, which were never included in that agreement,” said Starović.

In this way, he points out, our people in Kosovo and Metohija could have their identity cards taken away and they could be treated as foreigners who have the right to stay on the territory of Kosovo and Metohija for up to 90 days. According to him, it would be a legal way to expel part of the Serbs.

Ljiljana Smajlović points out that any fake news that the Kosovo police were shot at would be an excuse to use force.

“You’re creating an atmosphere that if you think the West is saying, ‘It’s true what was said that the Russians are going to open a second front’ – I guess that kind of news is launched – to create an opportunity… I almost can’t believe that everything ended without injuries,” Smajlović said and recalled how the false news from 2004 that Serbian children forced Albanian children to drown caused the pogrom.

Speaking about the misunderstanding on whose initiative Pristina postponed the implementation of the measures – the US or Brussels, Starović said that the only important thing is that it happened and that we return to the dialogue that has no alternative and with the help of which “such-and-such” peace was preserved in the past 11 years.

Smajlović also interprets this in the context of the war in Ukraine, since at this moment the USA has strengthened its role in Europe. He also notes that Pristina has reason to be dissatisfied, since it did not receive the visa-free regime from Brussels that, he says, everyone promised them.

Speaking about the role of Quinta in solving the Kosovo issue, Starović said that the Pristina authorities are focused on Quinta, and that they themselves say that they are coordinating their moves with it.

“It was logical for the president of Serbia to address the countries of the Quinte,” Starović said, adding that some of them had played a role the night before.

The burden of the war situation in Ukraine

The interlocutors also talked about how bringing Serbia into the context of the war in Ukraine could be harmful for us, agreeing that it does not suit us.

“We do not want to be part of the war conflict in any way,” said Starović.

Starović mentioned that all the representatives of Prishtina mentioned Vladimir Putin in yesterday’s advertising on social networks, which shows how complicated our geopolitical position is.

“I noticed that our government gets very nervous when Putin reminds us of the case of Kosovo,” Smajlović said, adding that it didn’t bother us before. That is why she criticized the advertising of Vladimir Đukanović, who wrote about “denazification” on Twitter, for which he later apologized, pointing out that such things make our situation difficult at a time when, as he says, “we feel like we are helping Russia to stir something up in Europe.” .

Speaking about what can be expected in the coming period, Starović pointed out that we have been given a month’s break to clarify all doubts.

“And to come to the definition of clear procedures that would not in practice endanger the daily life of our compatriots who live in the area of ​​Kosovo and Metohija”, said Starović and added that in the coming months we should also talk about the integrity of the Brussels Agreement, since that, as he says , the only political roof, within which the ZSO must be formed.

“Compromise is something that is very difficult to achieve, but I think we have to settle for that if we manage to preserve peace and stability in the coming period, and to preserve the lives of our people,” said Starović.

Smajlović points out that “unilateral” is the operative word in this case, and that he hopes that “something will be achieved” based on that.