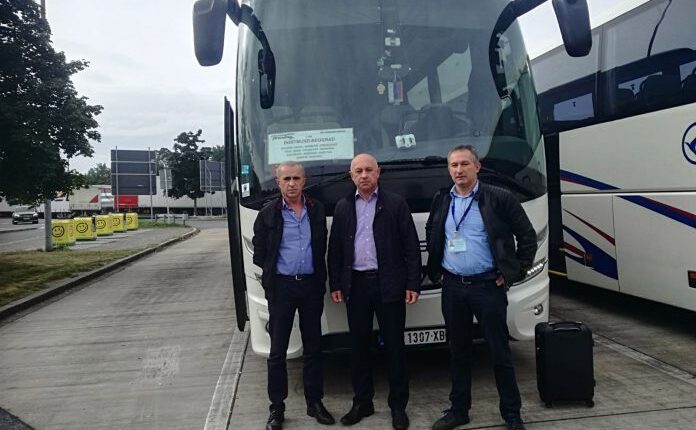 Serbs from Dortmund and Nuremberg, who were returning to Serbia on Tuesday on the regular bus line Lasta, survived the real hell after they were abducted by Fahrudin K, a Bosniak from Priboj.

Shouting that “Allah, God has commanded it” personally, while driving on the busiest German road, the A9 highway, he got up from his seat, pulled out large pliers and started beating the passenger in the seat next to his, and then one passenger. .

Thanks to the presence of other passengers, but above all three drivers, the tragedy was prevented, so no one was injured, and the kidnapper was defeated and arrested in the action of German special forces after four hours of drama.

Milovan Jokić, one of the three drivers of Lasta thanks to whom the tragedy was avoided, says that Fahrudin K. got on the bus in Frankfurt on the basis of a certificate issued to him by the German police. His passport had previously expired, so he was ordered to leave Germany within 24 hours.

– At the beginning of the ride, everything was completely normal. There were nine passengers on the bus, and four more boarded in Nuremberg. At around 4.30 pm, we had already taken the A 9 motorway, between Hipolstein and Greding, and were approaching Munich, when he got up abruptly. He pulled out something metal, like a motorcycle, and no doubt started hitting the young man in the seat next to him who was asleep at the time. He shouted that Allah had commanded him to do that, that the Lord had told him that he had to do this. He soon started hitting the girl who was sitting nearby. There was a terrible panic among the passengers and I stopped the bus in the stop lane – says the driver of Lasta, Milovan Jokić.

His colleagues Dragoljub Jelicic and Predrag Spasenovic were on the bus with him. Together, they managed to get the passengers out of the bus unharmed, and they stayed with the attacker and for the next four hours, as a kind of hostage, tried to calm him down.

At the beginning of the drama, the drivers contacted the dispatch center and explained what it was about. Then, Jokić was called from the Bavarian police, with whom he was in constant telephone contact during the last hours of the hostage crisis.

– I can’t reveal the details of what exactly we talked about, but it all came down to their instructions on what to do to protect the lives of passengers, but also how to save ourselves in case he tries to attack us. It was only after four o’clock, around 8.30 pm, that we were told to get off the bus, and then the police action began, which, you believe, looked like from American movies. First, several smoke bombs were dropped, and then their special forces smashed the rear window and, with shock bombs, crashed into the bus and defeated the attacker. Then we all went to the police to give statements – Jokic told “Vesti” and added that they only went to the hotel around five in the morning to rest.

According to unconfirmed information, Fahrudin K. was questioned by the police the same night, and the prosecution charges him with attempted murder.

In a short telephone conversation with “Vesti”, the Consul General of Serbia in Munich, Božidar Vučurović, confirmed that all passengers were well, except for the injured young man, and that transportation to Serbia was immediately provided for them.

However, Vučurović says that he does not know the details of this event.

– I have not yet received an official report from the German police, so I do not know the details of the whole event. Our consultant was contracted by several passengers and of course we met them. We expect to have more information in the coming days, but the most important thing is that there were no more injured – Vučurović emphasizes.

Attacked by the order of Allah

Jokic says that at the beginning of the play, Fahrudin K. was completely out of his mind.

– I don’t know if he was under the influence of some substances or something else, but he was in such a state that we were very afraid that he would get off the bus and get on the passengers again. Only in the end, we realized that he could attack us, but with the story, we slowly began to calm him down – says Jokić.

He explains that all three began to persuade him to calm down and through conversation they succeeded.

– He said all sorts of things. At first it was all incoherent, and then he almost calmed down. We watched him all the time, ready to react, although at that moment we didn’t know if he had a knife, a gun or something similar with that metal object. Believe me, it doesn’t matter at all when someone with such a look and behavior in front of your eyes repeats about Allah – says Jokić.

The main coordinator of bus traffic with Serbia from Germany, Zdravko Mitrović, explains for “Vesti” that he was in constant contact with drivers, and that the attacker was a native of Priboj who had previously tried to board one of the buses with fake papers, but that failed.

– When the drama started, I was immediately contacted by drivers, but also by passengers. Everyone was very scared, which is understandable considering the situation. Some of the passengers called the police, but as she was not coming, they asked me to help them. I did it immediately, and then the action of blocking the highway and the intrusion of special forces followed – says Mitrović and adds that a new bus was secured without delay, which transported all passengers to Serbia yesterday.

Blockade of A9 and railways

As almost all German media reported, the police action on the A 9 motorway, one of the busiest in Germany, lasted from the first notification sent by the driver by mobile phone from the scene at 5.30 pm, until 9.30 pm, when it finally ended with a commando raid and arrest. a suspected attacker on a bus.

Due to this drama, the traffic on the highway from Nuremberg to Munich was blocked for a full four hours, in both directions. The delay was caused by kilometers of long columns on both sides of the A 9.

And the trains stopped. ICE3 superfast train route
in that part of the section Nuremberg – Ingolstadt passes near the highway, so the headquarters of the German Railways in Berlin ordered first the trains to stop, and then alternative railway sections bypass the section between Allersberg and Kinding, a place where many police officers tried to solve the whole case of the hijacking of passengers and buses. Everything was finished by 9.45 pm, when the traffic was normalized.

For this kidnapping, the police, and then the German media, obligatorily put the sign “alleged”. Namely, before the interrogation of the defendant, but also the driver and the passenger, they were not sure what was actually happening.

The interrogation took place during the night at the police station in Feucht.

The German media treated this case as breaking news in all the news in the evening radio and TV program, but also in the online editions of the newspapers. This is understandable, because the blockade of the highway and the railway stopped the lifeblood of German domestic and international traffic on the route to the south of the country and neighboring Austria for four hours.