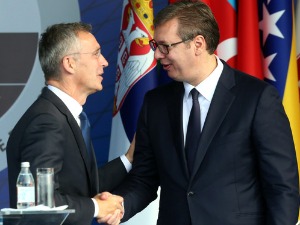 Peace and stability are essential

Vučić and Stoletenberg agreed that it is necessary to continue the dialogue between Belgrade and Priština, and that peace and stability are of crucial importance, not only for Serbia and the region, but also for all those who live in Kosovo and Metohija.

During the conversation with Secretary General Stoltenberg, President Vučić presented Serbia’s position on the extremely difficult situation in Kosovo and Metohija and introduced him to Pristina’s activities that cause additional fear and unrest among citizens of Serbian nationality.

Also, President Vučić emphasized that Serbia did not violate either the Brussels Agreement or Resolution 1244 with a single move, as it did not threaten the preservation of peace in any way, but that it continues to behave responsibly and seriously in solving problems and open issues related to southern Serbian province.

The two interlocutors agreed to continue direct communication in order to preserve peace and stability in the entire region, and President Vučić thanked General Secretary Stoltenberg for his correct attitude and willingness to listen to the Serbian side, announced the Service for Cooperation with the Media of the President of the Republic.