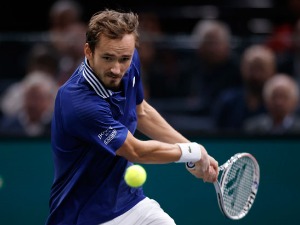 Medvedev outplayed Gaston, adopted by a duel with Zverev

The big fight, especially in the first set, Medvedev managed to come back and solve the set in his favor in the tie-break. The sequel brought a much better game for the Russians, Gaston tried to come back. However, Medvedev did not allow the match to continue, he brought the set and the match to an end and advanced to the semifinals.

Driven by thunderous cheering at Bersi, Gaston reached the break of advantage. However, already in the next game, when the Frenchman served for the set, Medvedev returned the break, even though the opponent had three tied set balls on his serve. The set was decided in a tie-break.

In the tie-break, Gaston had a mini-break advantage on two occasions, but Medvedev managed to turn it around and win this period with 9: 7.

The second set brought Medvedev’s game much better. He reached 4: 0 with two breaks. Gaston tried to answer, returned one break and approached 4: 3. However, the Russian manages to resist the onslaught of the opponent and decides the set and the match in his favor – 6: 4 in the second set.

The last semifinalist is Aleksandar Zverev, who defeated Norwegian Casper Rudd with 2: 0 in sets 7: 5, 6: 4.

In the first set, the decisive factor was the eleventh game in which Zverev took the service away from the opponent, and then brought the set to an end on his serve. During this period, Rudd did not manage to fight for a break opportunity.

In the continuation, Zverev reached the break in the third game. Rudd tried to fight back, but missed three break opportunities in the next game. It was also the last chance for the Norwegian, who managed to save five break opportunities in the seventh game and extend the match. The German then routinely brings the set and the match to an end, and he put an end to the match with a game without losing a point.

Thus, the second semifinal pair in Paris will be Medvedev – Zverev. The duel is on the program around 4.30 pm. Djokovic and Hurkac will play in the first semifinal at 2 p.m.

Individuals are the essence of this mission!