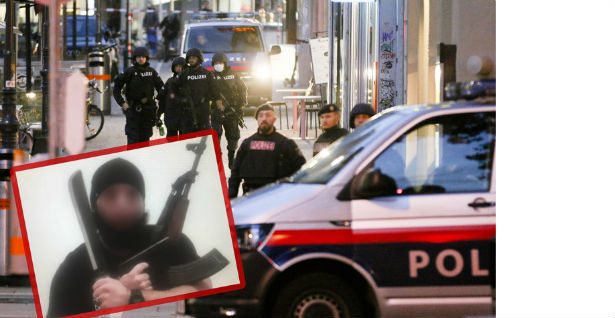 Kujtim F. (20) was killing folks within the middle of the Austrian capital

Terrorist from Vienna ALBANIAN ORIGINATING IN NORTHERN MACEDONIA: Kujtim F. (20) killed people in the center of the Austrian capital

The terrorist who carried out the terrorist attack in the center of Vienna last night is Fejzulaj Kujtim (20), an Albanian born in Vienna and a native of Northern Macedonia, confirmed the Minister of Internal Affairs of Austria, Karl Nehammer.

This information appeared in the media this morning, when Florian Klenk, the editor of the Austrian weekly “Falter”, published it on his Twitter profile. As he stated, Kujtin was born and raised in the capital of Austria, and he was known to the Austrian intelligence services because he was one of the 90 Islamists who wanted to go to Syria. Klenk did not disclose the source of his information.

Nehamer confirmed that the terrorist who was shot by the police last night had Austrian and northern Macedonian citizenship, as well as that he was 20 years old and that he had been convicted of terrorist association.

The Austrian Ministry of the Interior announced that the terrorist’s name was Fejzulai Kujtim, and they confirmed that he was a member of ISIS.

The attacker has a criminal record and several criminal charges. He was sentenced to 22 months in prison, but was released from prison in December 2019.

The terrorist, whose photo was published, and which shows him posing with a weapon, has probably been in Austria for a long time. According to the “Kronen Zeitung”, shortly before the bloodshed in Vienna, he swore allegiance to the new leader of the terrorist army of the Islamic State, Abu Ibrahim al-Hashimi al-Qurashi.

The killer in the picture shows a machete, a pistol and a Kalashnikov, with which he allegedly shot in the center of Vienna. Under Austrian law, the Kalashnikov is a weapon of war, and it is forbidden to possess it, which means that terrorists illegally acquired them.

Just before the attack, the killer published a new photo with which, “Bild” writes, he expressed his support for the Islamic State. It is not yet known whether the posting of the photo was a sign to launch an attack, and his Instagram profile has been closed.

Hundreds of police officers have been deployed on the streets of Vienna since this morning, searching for the perpetrators of the attacks, which the Austrian Minister of the Interior, Karl Nechamer, said had an “Islamist motive”.

The attacker was armed with an automatic rifle, and he also wore a fake belt with explosives, and Nehamer said that the attacker was radicalized and that he was a sympathizer of the Islamic State.

Pointing out that the attacker wanted to cause panic, Nehammer stated that he also wore something that looked like an explosive belt during the attack, but it turned out to be a fake explosive belt.

Before the terrorist attack in Vienna, a picture of a jihadist with a very similar weapon as the Viennese terrorist appeared on Instagram.

According to Bild, he sent footage of the attack on Charlie Hebdo 2015 to two friends on Monday, and he posted several pictures on Instagram in which he swears allegiance to the leader of the Islamic State.

In some photos, he is posing with a rifle and a machete, and there is also a picture with a pile of ammunition. The pictures also show that he wrote the Arabic word Baqiyah which is part of the phrase – “The Islamic State remains and expands”.

TERRORIST ATTACK IN VIENNA The variety of victims is rising, a number of arrests in the course of the night time, SOC temples TEMPORARILY CLOSED