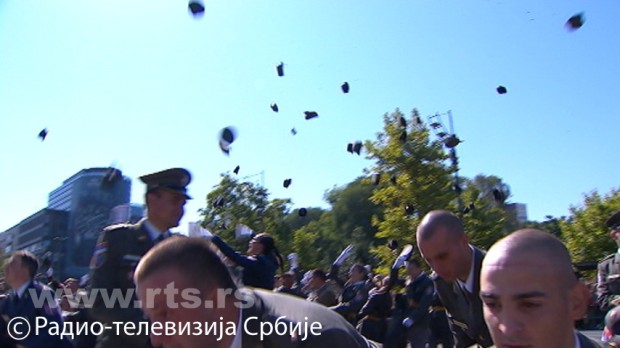 Hats flew up, the youngest officers of the Air Drive had been promoted – “moments”, “video games”, “tremendous gulls” over Belgrade

The hats flew high, near the ceremony

As in previous years, the hats flew high, which ended the solemn ceremony of promoting the youngest officers.

The flag was being sent off, and then Major Nebojsa Radojkovic greeted the officers in a “flash”.

“I congratulate our youngest colleagues on their first officer rank. Be the pride of your homeland. Long live Serbia,” Radojkovic said.

Sermon on patriotism from the book “Military Eloquence”

Music track “This is Serbia”

After the crash of the plane and the helicopter, the music song “This is Serbia” was performed by the ensemble “Stanislav Binički”. Flight program – flight of planes and helicopters of the Serbian Army

Major Nebojsa Radojkovic is in the first MiG-29 plane, which flew over.

This was followed by crashes of the “Eagle” assault plane, then “Super Gull”, “Swallow”, “Airbus” and “Gamma” helicopters.

In the end, the flight program ended with a Mi-35 helicopter.

The musical composition “Heavenly Regiment” is performed by the artistic ensemble of the Ministry of Defense “Stanislav Binički” and soloists Mina Gligorić and Milan Obradović. Vučić to the youngest officers: I want you to have high goals and not agree to stubbornness

President Aleksandar Vučić said at the promotion of the officer that this is the fifth time he has spoken at such an event and that is why he will not read the speech for the first time.

“Our Army is much stronger than it was. We have much better and more modern tools and weapons, and we make and buy it, not because we want wars, but because we want to deter anyone who wants to attack us,” said President Vucic. .

According to him, there were a lot of problems in attracting personnel to the army, but as he says, now the Serbian Army is the most popular institution in Serbia. The president also announced an increase in salaries in the army.

“No more – I finished school, these people will have to study every day. I heard that these people are amazing, that we did not have such a good flyer who will guard our sky like Petar Ilic,” Vucic pointed out.

He believes that such the best will choose this invitation.

He thanked the officers’ parents and families for the difficult moments they went through.

“We have many challenges ahead of us and I believe that we will be able to preserve peace, but the Serbian Army is the guarantor of peace and stability. A strong and strong army is because of you, people, because without you, our army would not exist. army, strength, heart and love for the homeland “, said Vučić.

“I want you to have high goals, not to accept stubbornness and to always do better. I wish you a lot of success. Long live the Serbian Army, long live Serbia,” Vucic said.

Petar Ilić, first in the rank: Today is a special day, I realized a boy’s dream

Petar Ilić, the first in the rank, said that he was given a great honor to address on behalf of all the youngest lieutenants.

“I thank all of you who came. Today is a very special day and represents the aging of a boy’s dream. I dreamed of becoming a pilot. There were many obstacles and the goal seemed far away. I decided to try and stand before you today,” he said. Ilic.

I tell younger cadets, never limit yourself and dream big dreams. There are no happier people than my colleagues and me, said Ilic.

Dear parents, we cannot repay all the care. On behalf of all of us, I thank you from the bottom of my heart, said Ilic.

“Dear colleagues, I wish you a lot of success in your career in life. Serve your homeland with honor. Be worthy heirs of your ancestors,” concluded Petar Ilić. The most successful were awarded pistols with dedication

President Aleksandar Vučić awarded the most successful cadets with pistols with dedication.

These are lieutenants of the Army Milan Asceric, RV and PVO Petar Ilic, in the rank of services Stefan Zivkovic and the Medical Faculty of the Military Medical Academy Tijana Stanojkovic. Decree of the President of the Republic

The decree of the President of the Republic, Aleksandar Vučić, was read by Colonel Srdjan Duvnjak.

“Pursuant to Article 135.1, 114 cadets of the 141st and 142nd classes of the Military Academy and 18 cadets of the Medical Faculty of the University of Defense are produced as lieutenants. President of the Republic Aleksandar Vučić.” Rector Radovanović: If you stumble on the road, get up when it is most difficult

The promotion of cadets is a significant individual and social event. We all express our satisfaction because the cadets are in front of us, said the rector of the University of Defense, Goran Radovanović.

Each of them makes the potential of people with high intellectual qualities and strength, says Radovanović.

I am honored to greet you and thank you for attending the ceremony, the rector said.

Our university educates young people and its reputation is determined by the presence of delegations from BiH, said, among other things, Radovanović.

“If you stumble on the road, get up when it is the hardest,” said Radovanović. Intonated anthem of the Republic of Serbia

After the President of Serbia, Aleksandar Vučić, greeted the cadets, the anthem of the Republic of Serbia “God of Justice” was sung.

Fanfare marked the beginning of the ceremony, a report was handed to the president

The ceremony of promoting the officers began with the announcement of the fanfare and the welcome of the Supreme Commander of the Serbian Army, President Aleksandar Vučić.

Rector of the University of Defense Goran Radovanovic submitted a report to the President of Serbia.

The ceremonial promotion of the officers begins The Serbian Army got new officers. The promotion of cadets to the youngest officers was held in front of the National Assembly.

The President of Serbia and the Supreme Commander of the Serbian Army, Aleksandar Vučić, presented the best with a dedicated pistol as a gift.

These are lieutenants of the Army Milan Asceric, RV and PVO Petar Ilic, in the rank of services Stefan Zivkovic and the Medical Faculty of the Military Medical Academy Tijana Stanojkovic.