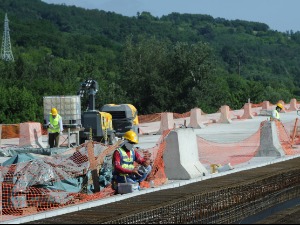 Freeway to Krusevac by the tip of the yr

Aleksandar Vučić visited the works on the construction of the bridge over the West Morava, which is located on the section of the highway from Pojat to Kruševac, and announced that the highway to Kruševac will be completed by the new year at the latest.

The construction of that bridge, whose length is about 500 meters, started at the end of last year, and so far more than half of the planned works have been completed.

Vučić said that there are 3,600 workers on the construction site of the Moravian Corridor and that the expropriation of land for that project has been completely completed.

“Corridors of Serbia” is the investor in the project of building the Moravian Corridor.

Vučić pointed out that this highway is very important for the construction of both Kruševac and Trstenik, where an industrial zone should be built and three or four factories should be brought, which would be a salvation for reducing unemployment in that area.

“For the new year, everyone will have a highway from Pojat to Krusevac,” said Vucic.

He added that it will mean a lot to attract investors.

“Section from Kraljevo to Čačak at the beginning of 2024”

Later, we will see to make a fast road to Novi Pazar, Vučić added.

Congratulations on how the works are going, Vučić told the contractors and added that out of 3,600 workers, about 1,700 are our citizens. He added that other workers are from India, Turkey, Bangladesh and other countries.

He stated that in the first five months, we had more people from abroad who applied for a work and residence permit than during the entire previous year.

He also announced that a fast road from Kragujevac to Mrcajevac would be built, as well as that industrial zones would be built between Krusevac and Trstenik, but also between Kraljevo and Cacak, for several large factories, which would employ people in western Pomoravlje.

“This will be the widest highway and completely digitalized,” Vucic pointed out.

When asked how he sees Serbia in four years, when all current projects are completed and what he can say about the Belgrade-Timisoara highway project, Vučić answered:

“Toma (Momirović) goes and announces, or when he asks. It is a fantastic project, but he has not yet said where he found the money. I guess he told Siniša Mali that it is important. And since he is a minister in the government, we cannot we will give up and build “, stated Vučić.

He stated that Banat will be extraordinarily connected, and added that the project of the Belgrade-Zrenjanin highway is still underway.

Vučić said that with the completion of the bypass around Kragujevac and the connection with Corridor 11, the whole of Serbia will be networked.

He reminded that the Danube highway is being built, that the highway to Vrsac will additionally contribute to the development of Pancevo, which, he says, is the city of the future and which will grow the fastest due to the industrial zone and the quality of the factories that came.

Vučić said that this will be the best highway that connects the entire Moravian part with Belgrade, Niš and western Serbia.

The length of the Moravian Corridor is 112.37 kilometers, 88 bridges and overpasses, 29 underpasses and 11 loops are being built on it, and the course of the Western Morava will be arranged.

The works are being performed by the Turkish-American consortium “Bextel Enka”, and the value of the works is 745 million euros.

The road is designed for speeds of up to 130 kilometers per hour and will be the first domestic digital highway.

The Moravian Corridor will also be the widest highway in Serbia.

When completed, it will connect the Belgrade-Nish highway with the Milos Veliki highway and connect a number of local governments in central Serbia, and it is expected to contribute to new investments, employment and a significant increase in the living standards of the inhabitants of this part of Serbia.

Construction of the Moravian Corridor, the so-called highway on the “three Morava”, began in late 2019.