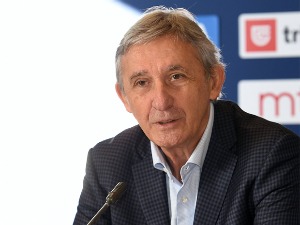 “The official start of preparations is on June 23, and until then, selector Pesic and his associates will work with players who finished the season earlier and who need an introduction to the maximum efforts of the competitive rhythm in the qualifications,” the KSS said in a statement.

The team that the coach will count on in this qualifying “window” will be completed before the official start of preparations, and the list of candidates for the national team currently looks like this:

For the first two days, the Serbian national team will be preparing in Belgrade, and in that period a press conference will be organized, with which the qualification window will be officially announced.

On Saturday, June 25, the Serbian national team will travel to Nis, where it will continue with preparations.

On Wednesday, June 29, the Serbian team travels from Nis to Riga, where they will play against Latvia on June 30.

In the four games played so far, the Serbian team has 3 wins and one defeat, and the next two games are of great importance before the second phase of qualifications because the results are transferred to the newly formed group in which Serbia, Latvia and Belgium will compete with Greek teams. Turkey and Great Britain.

Of those six teams, only three will qualify for the 2023 World Cup.