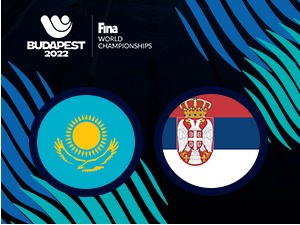 “Dolphins” in opposition to Kazakhstan certify the quarterfinals (18.00 RTS1)

After two victories, over the USA (17:13) in the first round and against Australia (6: 5) in the second, our national team is facing a duel with the weakest team in the group. A match that will serve the “dolphins” to play in addition and correct the observed mistakes from the first two matches.

In such a duel, selector Savić will have the opportunity to evenly distribute the minutes and prepare the team for the much bigger challenges that lie ahead at the end of the competition.

Serbia practically secured the first place in the group and a direct placement in the quarterfinals, while the national teams of the USA and Australia will play in the eighth finals, and tonight they will decide in a direct clash which team from position two will continue the competition.

The duel between Serbia and Kazakhstan will be played from 18.00. The broadcast is on our First Program, stream on RTS Planet (for visitors from Serbia), follow the course of the match on our portal.

From 7.30 pm, the second match of our group will be played, in which Australia and America will meet.