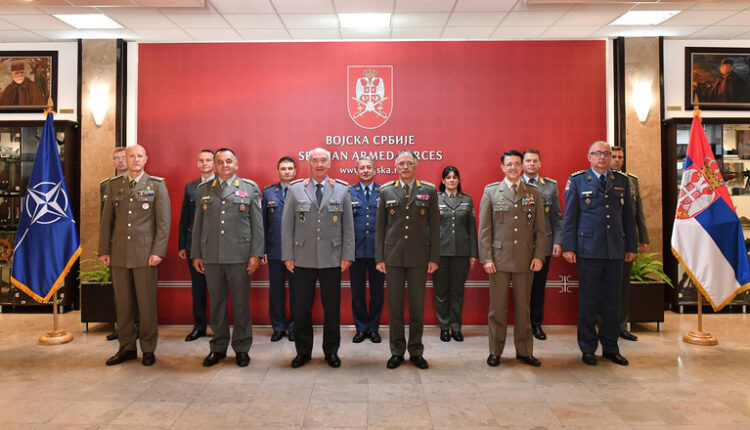 From 23 to 25 May 2022, the Director General of the NATO International Military Staff, Lieutenant General Hans-Werner Wiermann was in Serbia, where he met with Serbian officials, including the Minister of Defence, Mr Nebojša Stefanović, the State Secretary from the Ministry of Foreign Affairs, Mr Nemanja Starović and the Chief of Defense, General Milan Mojsilović. The Director General also met with the Head of the NATO Military Liaison Office, Brigadier General Antonello Zanitti.

Lieutenant General Wiermann started his program with a visit to the Serbian Armed Forces General Staff, where he met with General Mojsilović. Discussions focused on the current global and regional security situation, the NATO-Serbia cooperation so far and the modalities of its potential enhancement.

Lieutenant General Wiermann commanded General Mojsilović for “the service of the Serbian Armed Forces and their professionalism and, for the exemplary, cooperation between the Serbian Military Authorities and the Commanders of NATO’s KFOR Mission”.

Meeting with the Minister of Defence, Mr Nebojša Stefanović, the Director General highlighted the role Serbia plays in the region. “NATO has always respected Serbia’s military neutrality, while recognizing the stabilizing role it plays in the region”, he added.

Later, sitting down with the State Secretary from the Ministry of Foreign Affairs, Mr Nemanja Starović, the Director General commented on the enduring partnership between NATO and Serbia. “Over the last 15 years, Serbia and NATO have established a very constructive partnership. We are grateful for the open communication with Serbia that helps us to maintain the security situation on the Western-Balkans stable”, he emphasized.

Lieutenant General Wiermann concluded his visit by meeting the Head of NATO Military Liaison Office, Brigadier General Zanitti. Established in December 2006, the Liaison Office plays a crucial role between NATO and the Serbian authorities, especially in facilitating Serbian cooperation with the Alliance under the Partnership for Peace Program and ongoing military cooperation mechanisms.

/PublicRelease. This material from the originating organization/author(s) may be of a point-in-time nature, edited for clarity, style and length. The views and opinions expressed are those of the author(s). View in full here.

Serbia: civil society builds bridges between migrants and well being employees throughout the COVID-19 pandemic