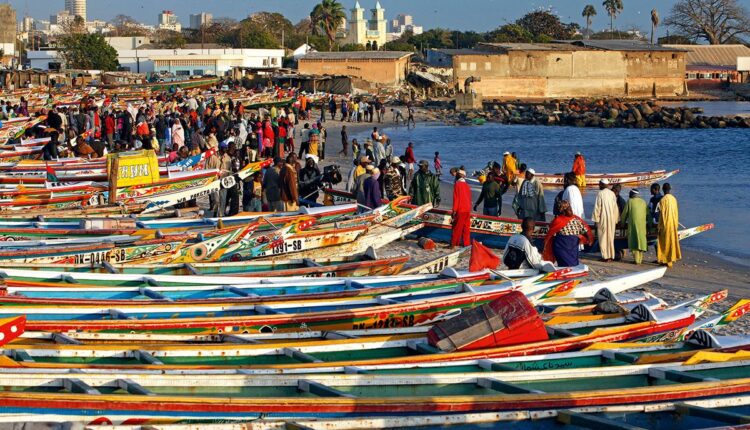 Further up the four-lane Corniche road, towards Africa’s westernmost point, is a somewhat more controversial edifice: the unmissable Monument de la Renaissance Africaine. Brainchild of former president Abdoulaye Wade, this 52-metre-high, North Korean-built statue of an over-heroic man, woman and child looms on a prime oceanfront hilltop and was inaugurated in 2010. It’s the tallest statue in Africa and visible for miles around, but despite its grand pretensions, most Senegalese seem to just think it’s a bit naff (and a waste of money to boot).

Given its location, life in Dakar is often oriented towards the sea, and in a city with precious few public parks or green spaces, the many beaches provide a well-loved respite from the perpetual din of commerce and traffic in some of the city’s more crowded districts. As such, the whole population seems to decamp to the beaches at weekends to picnic and swim with family and friends, to work out or wrestle on the sands (traditional wrestling is huge here), or even to bring their sheep to the water for a full scrub down in the surf. The city’s army of fishermen also haul their multi-coloured wooden pirogues ashore every evening, their catch quickly bound for plates and bowls around the city – eat fish grilled on the spot at Soumbédioune market.

And no trip to Senegal would be complete without sampling the national dish, thieboudienne – literally ‘rice and fish’. Consisting of rice cooked in a tomato-vegetable broth and topped with stewed carrots, cabbage, aubergine, a great hunk of fish and a tamarind chutney, thieboudienne is to the Senegalese as coffee is to an Italian – an absolute essential and a source of national proud. It’s available everywhere, served from big heaping bowls on the roadside or at the finest restaurants in the city.

GRETA carries out third analysis go to to Serbia