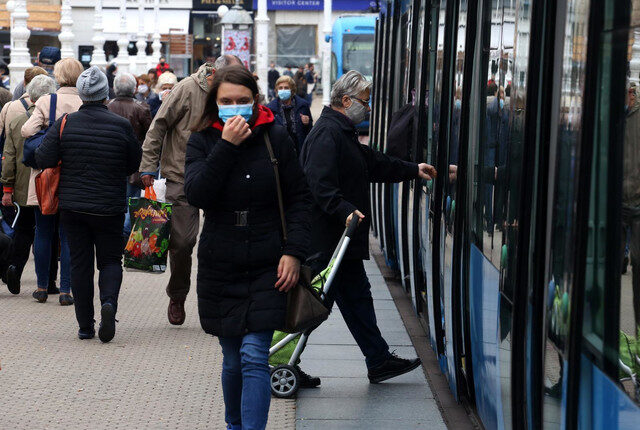 "CROATIA LOSES THE BATTLE WITH THE CROWN" Because the starting of the epidemic, MOST DEAD, in Slovenia 1,000 circumstances MORE THAN YESTERDAY

In the last 24 hours, 2378 new cases of SARS-CoV-2 virus infection were recorded, and the number of active cases in Croatia today is 12736.

Among them, there are 932 patients on hospital treatment, of which 68 patients are on respirators.

There are currently 14,924 people in self-isolation.

Today’s death toll is even higher than yesterday’s, which was the largest until then.

Croatia is slowly losing the battle with the virus, claims the immunologist, professor at the University of Rijeka Stipan Jonjic, who points out that the most important thing now is to protect the health system and appeals to sanctify everyone in accordance with the situation, which, he warns, is extraordinary.

– We are slowly losing the battle with the virus in the sense that we can use classic epidemiological measures, that we can recognize contacts. How many epidemiologists would it take now to connect all contacts … – stated Jonjić.

He believes that the whole strategy must be changed and claims that Croatian experts know that.

– We must do everything to prevent the collapse of the hospital system, a lot is being done in that regard – he said as a guest on Zagreb’s N1 TV.

– It is not a question of democracy or human rights, but the protection of the hospital system for the benefit of all. If measures are adopted that need to be respected, then the ministers must redistribute the people. The staffs will have to mobilize people, and they are behaving according to emergency measures, but the entire health care system must understand that it will probably no longer be in peacetime, but other things may be done – Jonjić appealed.

He points out that everyone must be aware and that they must not do something that will make the situation worse.

– I think that it will work in Croatia, we have learned to deal with difficult situations – said Jonjić.

Today, a large increase in the number of new cases of coronavirus has been recorded in Slovenia – there are as many as 2605. 7471 tests were performed, which means that the percentage is positive 34.87.

Eight people died and there were 612 in hospitals, 99 of whom are in intensive care.

There were 1499 newly infected yesterday.

A new record number of cases of infection was announced last night by the director of the Golnik hospital, Aleš Rozman, who says that he believes that the numbers will not start to decrease soon.

– When the results are supplemented, we will be able to count on a larger number. There is no indication that the number of new infections could fall. We hope that the numbers will start to calm down at the end of the week, when the last prescribed measures start to take effect – said Rozman, director of one of the covid hospitals and a member of the government’s expert team.

As a reminder, a lockdown has been in force in Slovenia since Saturday, shops have been closed, except for those that sell food and basic necessities, the work of hairdressing and beauty salons, wellness centers, swimming pools, cinemas, theaters and gyms is prohibited, and classes in schools are online. The curfew is in force, and as of yesterday, the ban on moving from one province to another is in force.

BOTTOM OF DNA! Cameras on Zlatibor filmed a younger man STOLE A BOX WITH SUPPLEMENTS for the therapy of little Minja