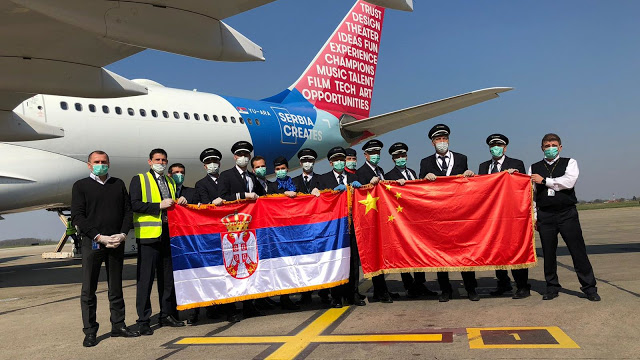 According to the Serbian daily “Danas”, one of the three leading airline groups in China has expressed an interest in taking over Etihad Airways’ minority stake in Air Serbia. The Chinese government has informed its Serbian counterpart that a “state-owned Chinese company is ready to take over a 49% stake in another troubled Serbian company”. A source close to the government told the newspaper: “It would be appropriate for the Serbian government for a large Chinese airline to become a shareholder of Air Serbia and Etihad’s stake. With that in mind, the government stands ready to approve the proposal. However, there are concerns that Brussels would disapprove of this. ”

China is strong and controversial in Europe. Last year the European Parliament passed new regulations that create a framework for screening foreign direct investment into the EU, primarily targeting China. In essence, the new framework allows the EU to review purchases by foreign companies targeting Europe’s strategic assets, including aviation. Even non-EU states like Serbia that want to join the bloc are likely to do so. As a result, according to “Danas”, the Serbian government has yet to react to the Chinese offer and has not published the information for this reason. The three largest airlines in China, all of which are state-owned, are Air China, China Eastern Airlines, and China Southern Airlines.

Last week, Etihad Airways suspended flights between Abu Dhabi and Belgrade for an indefinite period and appears to be ending its codeshare partnership with Air Serbia next year, indicating that its stake in the company is also coming to an end. The Serbian government has indicated that Etihad may withdraw from its partial ownership of Air Serbia. In October, she passed a decree that allows her to recapitalize Air Serbia. Through recapitalization, the state can increase its stake in the company, which it can later sell. The Serbian president indicated in the summer that another strategic partner could be called in if Etihad were to leave the airline in whole or in part. “We could introduce a few other strategic partners, but we will continue to hold a majority stake. Air Serbia will be our flagship and it will be stronger than it is today, ”he said.