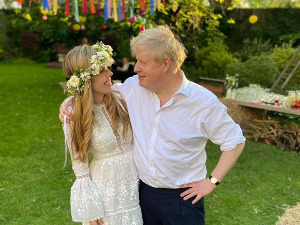 Boris and Kerry Johnson originally planned to hold the wedding at the Prime Minister’s official residence, Checkers, in Buckinghamshire.

As the plans sparked a public backlash accusing Johnson of remaining in the prime ministership just to take advantage of the opportunity to hold a wedding at the residence, the couple decided to change the location, even though they had already sent out invitations for July 30.

The couple tied the knot in a low-key, private ceremony at Westminster Cathedral last year, held in secret, with close family and friends in attendance.

This was followed by a reception in the gardens of Number 10 Downing Street with a limited number of guests due to the corona virus restrictions.

Billionaire Lord Bamford covered at least part of the cost of the party, as reported by the British newspaper Mirror, citing unnamed sources.

This is not the first time that Mr. Johnson, who is in his third wedding, has benefited from the support of the chairman of JCB.

Lord Bamford backed Boris Johnson’s 2019 bid for Conservative leadership, and the prime minister performed acrobatics on a bulldozer made by Lord’s company JCB at a factory in Staffordshire in his Brexit campaign.

Lord Bamford’s wife, Lady Carol Bamford, founded the luxury organic farm “Daylesford”, with a chain of shops where she sells her produce across London.

Boris Johnson reportedly received around £12,500 worth of food from a Daylesford farm shop during the pandemic, although Downing Street said he paid for all the food himself for “personal consumption”.