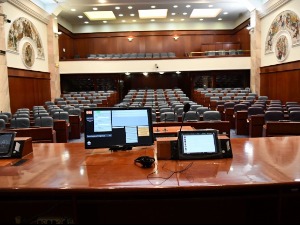 Bodily battle within the parliament of Northern Macedonia – cups, amendments and "Wild West"

The incident happened after the speech of the coordinator of the VMRO-DPMNE parliamentary group, Nikola Micevski, who accused that there were no members of opposition parties in the commission.

The chairman of the Committee on European Affairs, Arber Ademi, stated that the agenda of the Committee was adopted, after which the opposition deputies of the Alliance for Albanians and VMRO-DPMNE tried to end the discussion, and Ademi reacted more aggressively and shot them with a coffee cup.

The microphone is then muted.

Previously, VMRO-DPMNE submitted more than 200 amendments with the intention of blocking the law. Following the incident, VMRO-DPMNE called the commission "Wild West Commission".

According to TV Telma, the Alliance for Albanians is "she pointed a finger at the DUI"which she said yes "wants to hide crime and corruption in the country through smuggling laws".

DUI blames VMRO-DPMNE and the Alliance for Albanians for today’s scandal, without condemning Ademi’s behavior.

The SDSM, on the other hand, criticized only VMRO-DPMNE’s address, accusing the opposition of fiercely defending the regime and opposing the functioning judicial system.