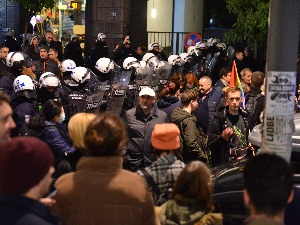 As a result of mural of Ratko Mladic within the middle of Belgrade, a protest and a cordon of police

Activists, citizens, representatives of non-governmental organizations and some opposition political parties were present at the gathering in front of the Youth Center.

Aida Ćorović was released from the police shortly before 7 p.m. after which she addressed the gathered citizens in front of the Youth Center.

She said that her and Jelena Jacimovic’s reaction, which was also detained, were completely spontaneous.

“It was a symbolic act, we know that the mural will not be damaged by eggs,” said Corovic.

The activists then headed from the Youth Center to Njegoševa Street, where the mural is located, but they were stopped – a police cordon was set up in that street, not far from the mural dedicated to Ratko Mladić.

As Fonet reports, about 20 supporters of Ratko Mladic appeared tonight in Njegoseva Street, at the moment when the organizers of the rally in support of Aida Corovic and Jelena Jacimovic announced that the rally was over, and the citizens began to disperse.

They appeared behind a police cordon that prevented citizens from approaching the mural.

The Youth Initiative for Human Rights scheduled the removal of graffiti for Ratko Mladic in Vracar for today, but the Ministry of the Interior banned the gathering.

Activists Aida Ćorović and Jelena Jaćimović threw eggs at the mural, after which the police arrested them, and later released them in the afternoon.

The Ministry of the Interior announced that the police do not protect the mural, but public order and peace, and control the implementation of the ban on gatherings.

To that end, all persons have been legitimized, regardless of their attitude towards the mural dedicated to Ratko Mladic, the Ministry of the Interior stated.

Members of the Ministry of Internal Affairs arrested six people today for disturbing public order and peace in the zone of illegal public gathering, and on the occasion of removing the mural, it is stated in the announcement.

It is added that J.A., A.Ć. and another person, who supported the Youth Initiative for Human Rights, as well as Partizan D. fans. K., L. M. in which a knife and two pepper sprays were found during the search, and Ђ. P.