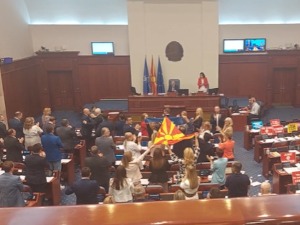 After three days of discussions and incidents, the meeting adopted the French proposal for the EU

With 68 “yes” votes, the MPs adopted conclusions that will be forwarded to the Government of North Macedonia in order to continue the process with the European Union and adopt the negotiation framework.

The deputies greeted the adoption of the conclusions with applause and unfurled the flag of North Macedonia and the flag of the European Union in the assembly hall.

The vote was passed without VMRO-DPMNE and Left MPs, who left the session of the Assembly, because the request of MP Dafina Stojanoska for an hour break after the end of the debate on the French proposal for the negotiation framework was not accepted.

MPs from VMRO-DPMNE and the Left demanded the rejection of the French proposal, which, according to them, leads to the direct assimilation of the Macedonian people and the long-term obstruction of the European path to North Macedonia.

On the other hand, MPs of the ruling coalition are convinced that this negotiation framework offers the inviolability of the Macedonian identity, as well as the beginning of negotiations for full membership in the Union.

Debate in the Assembly it took place in a tense atmosphere with the exchange of accusations of betrayal of national interests and Bulgarianization of the state.

While the discussion was going on, citizen protests were organized in Skopje. A total of ten people were detained, because during the debate they threw “hard objects” at the parliament building.

What does the French proposal mean?

A French proposal to solve the problem between Skopje and Sofia is the result of a diplomatic initiative launched by President Emmanuel Macron at the end of last year, wanting Macedonian European integration to start from a deadlock before the end of the French EU presidency.

A few months later, Skopje and Sofia received a draft agreement, according to which the two sides would agree to an agreement, after which the first intergovernmental conference of the EU and North Macedonia would be held. The next one would be scheduled only after the Bulgarian minority was registered in the Macedonian Constitution.

Other issues, according to that plan, would be resolved during negotiations between the EU and North Macedonia.

This agreement, firstly, was the trigger of a more complex political crisis in Bulgaria, which ultimately resulted in the fall of Kirill Petkov’s government.

The authorities in Sofia, on the other hand, believe that before the negotiations begin, it is necessary to resolve the issues related to the Macedonian national identity, i.e. the issue of the language and identity of the national heroes, among whom Goce Delčev.

Bulgaria also states that “the Macedonian language was created in 1944”, and that it can only be counted as a “written regional form of the Bulgarian language”.