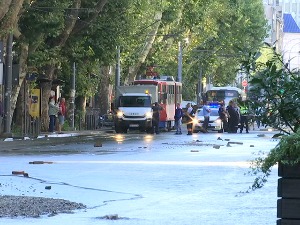 A water pipe burst close to the College of Mechanical Engineering, site visitors was stopped, the water additionally washed away the asphalt

A huge amount of water spilled this morning near the Faculty of Mechanical Engineering in Kraljica Marija Street when a main pipe burst. Around 7:30, the water receded, and it turned out that the malfunction occurred at the public lighting pole.

Director of the Water Network, Branimir Stević, said that the crews shut off the water in a short period of time.

“At the moment, preparations are being made to remove the defect, to remove the banner. When it is physically unearthed, we will see the nature of the defect and remove it,” Stević said.

According to the RTS reporter from the scene, around 6:40 a.m. a huge amount of water poured out, washing away the asphalt, and the parking spaces were also cracked.

The accident happened in a similar place in 2019, while the renovation of this street was still ongoing.